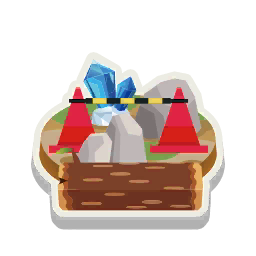 The quarry is a location run by Lloid where a player can break rocks to find rare minerals and gems. These are then converted into bells and/or materials depending on the featured reward (which ranges from Essences to Craft Materials to only Bells). The featured reward is displayed over the quarry on the map and changes every 12 hours.

When a friend requests help from you to access the quarry, a shovel icon will appear on your friends list and the "Lend a Hand" button next to their name will become available. Pressing the lend a hand button will contribute to their quarry entry, and after a friend has entered the quarry, all friends who have lent a hand will receive 1

Inside the Quarry[edit | edit source]

Inside the quarry, a player is put into a field of several rocks. A player is given a chance to break rocks which will then reveal a mineral. After five rocks, all the minerals will be totaled and Lloid will give the player their reward.

These are the following minerals that can show up in the Quarry:

Occasionally, the Quarry's reward will "sparkle". When this happens, going into the Quarry and breaking rocks will have a higher chance of giving Gold and Silver Nuggets, giving a better chance of more of the featured material reward.

The featured reward affects how much of the reward a mineral will give. Additionally, each mineral has a chance to give bonus rewards.

Note: The game calculates the minerals and any bonuses before the player enters, so they will receive the same reward, no matter which rocks are broken.